Betrayal Part One in Full Color 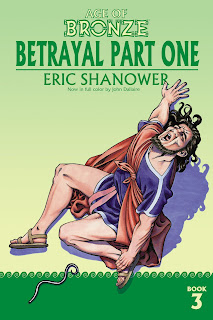 At last, Book Three of the Age of Bronze graphic novel series shines with full color for everyone to see! Betrayal Part One goes on sale today from Image Comics.

This volume tells the story of Philoktetes's betrayal and digs deeply into the beginnings of the Troilus and Cressida episode. The cover features the moment just after Philoktetes is bitten by the snake.

John Dallaire's colors bring to life the Achaean attack on the island of Tenedos, the embassy to Troy when Hektor seems to be the only person still trying to reach peace between the two sides, and Menelaus's drunken memories of growing up with Helen. 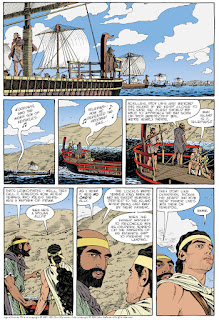 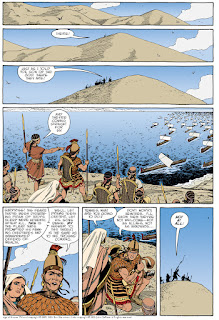 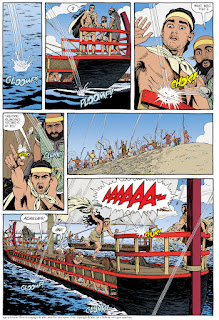 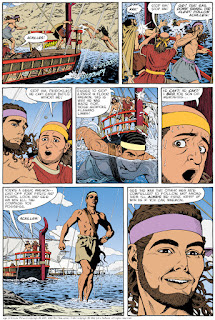 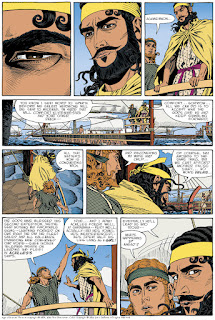 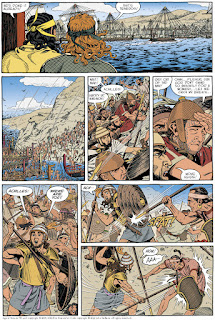 Posted by ericshanower at 11:34 AM 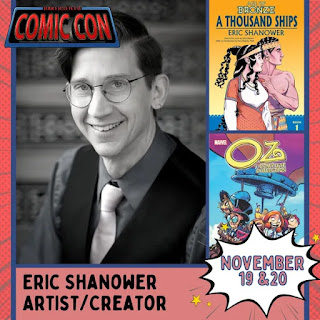 This coming weekend, November 19 and 20, 2022, I'll be appearing in person at the Bakersfield Comic Con at the Kern County Fairgrounds in Bakersfield, California. Come check out all the fun!

Posted by ericshanower at 1:51 PM

Signing at Jan's Books in Beaverton 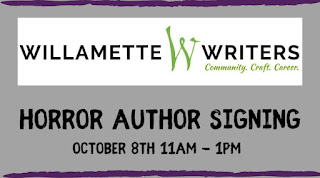 Jan's Books in Beaverton, Oregon, is holding an author event in connection with Willamette Writers. Saturday, October 8, from 11 to 1, several writers, including me, will be signing books in front of the bookstore. Horror authors will primarily be featured, in celebration of Hallowe'en, but I'll be there with my Oz fantasy work and Age of Bronze historical fiction. Come check it out if you get the chance!

Posted by ericshanower at 6:18 PM

Email ThisBlogThis!Share to TwitterShare to FacebookShare to Pinterest
Labels: appearance 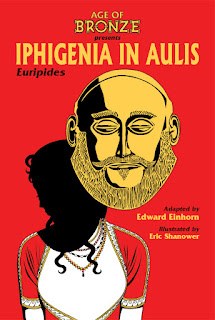 Author Edward Einhorn, translator of the recent English-language publication of Iphigenia in Aulis by Euripides, is holding a reading at Word Up bookstore in New York City. This Age of Bronze edition of the Classical Greek tragedy, illustrated by me, has proven unexpectedly popular for a drama thousands of years old.

The reading is scheduled September 20 at 7 PM eastern time. Space is limited, so sign up here at the link, if you're planning to attend.

Posted by ericshanower at 1:23 PM

Last week, Chloe Ramos, of Age of Bronze publisher Image Comics, conducted an online interview with me for SLJteen Live!
I talked about Age of Bronze and some other aspects of my cartooning career.

If you didn't get a chance to watch the interview live, you can watch the recording for the next three months.  Click here to access my video, download exclusive book previews, and more in the official Image Comics Booth.

Registration is free and guests can continue to visit the space until November 4th, 2022.

Posted by ericshanower at 1:48 PM 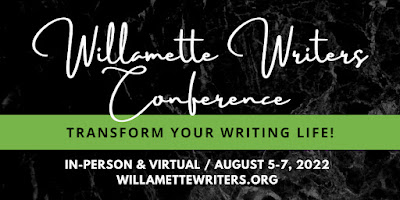 The Willamette Writers Conference 2022 takes place in Portland, Oregon, this weekend. I'll be leading a workshop on Saturday morning, August 6, 2022. The title--Following the Yellow Brick Road: Writing and Publishing Comics and Graphic Novels.

On Sunday, I'll be one of the panelists for a discussion of graphic novels.

All writers are welcome to attend. Some of the sessions will be on Zoom. My workshop will be available for attendees to view online for a month following the conference. For registration and more info, here's the link: https://web.cvent.com/event/0ee6cf28-4805-4953-8a8b-80c9fce26903/summary

Posted by ericshanower at 11:34 PM 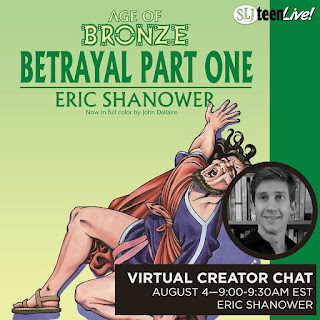 Join me for a live chat in the Image Comics booth by registering for the free virtual event, SLJTeen Live!, on August 4, 2022. We'll be talking about Age of Bronze, my career as a cartoonist, and comics in general. You can get an exclusive reading guide for my newest release! Register at the link above.

Posted by ericshanower at 11:21 PM

When I conceived the idea for Age of Bronze, my graphic novel retelling of the complete legend of the Trojan War, I knew I’d be using a few plays as sources for my version of the story. After Age of Bronze began publication, I realized that I’d be able to repurpose my comics panels as illustrations. How interesting it would be, I thought, to publish illustrated versions of many of my sources, in particular the dramas.

In late 2008, I mentioned to my friend Edward Einhorn, playwright, director, and children’s author, my idea of using a public domain English translation for a new edition of Euripides’s Iphigenia in Aulis, illustrated with my Age of Bronze imagery. I was concerned, however, that an old translation would seem out of step. Edward had previously translated a version of Lysistrata, the Greek comedy by Aristophanes, and he offered the idea of translating Iphigenia himself anew. Seemed like a fine idea to me. Within a few weeks, Edward had finished a draft of his new translation.

During the next year I chose panels from Age of Bronze to accompany Edward’s text and began a rudimentary book design. Edward wanted my artwork to not simply accompany his script, but to interact with it as much as possible, to help bring the script to life. Neither Edward nor I particularly liked my attempts much. Unable to find a look that satisfied both Edward and me, I put the project aside in favor of more urgent work.

In early 2013, Edward staged a full production of his Iphigenia script, complete with music, through his Untitled Theater Company #61 at LaMama in Manhattan. In the classical tradition, the actors used masks, expertly brought to life from my Age of Bronze character designs. Graciously, Edward flew me to NYC to see a performance—which I found terrific—and to participate in a question-and-answer session with the audience afterward.

Meanwhile, the book project lay stagnant, until Edward asked another cartoonist for help with book design for Iphigenia in Aulis. He thought the work of Bishakh Som, then editor and contributor to the anthology comic Hi-Horse and cartoonist of the recent graphic novel Apsara Engine, had some resonance with my Age of Bronze artwork. Bishakh gave designing Iphigenia in Aulis a shot. In the end, Bishakh wasn’t happy with the results and bowed out of the project.

Iphigenia sat in limbo again. Finally, Edward’s wife, Connie Wu, designed the book, integrating the text and artwork with comics dialog pointers and interspersing the text with the artwork so that the elements lent each other a bit of movement. I finished eliminating word balloons from the images and drew a couple new illustrations for the book. The cover uses the image from the poster I designed for Edward’s 2013 theatrical production.

I’d originally planned to publish Iphigenia in Aulis myself, but Edward urged me to approach Image Comics, the publisher of Age of Bronze. I didn’t think Image would have any interest in publishing a play script, but I figured asking wouldn’t bring on any more rejection than I've weathered many times in the publishing business. I submitted the project to Image and heard nothing back for a few months. I figured that meant Image had no interest, but my request for Image to confirm a rejection prompted an acceptance in early 2020.

Covid-19 caused some delays and problems with paper stock accessibility, but finally Image released the Age of Bronze edition of Iphigenia in Aulis several weeks ago. It doesn’t use my original choice of paper, but the paper stock matches the Age of Bronze graphic novels. It’s available now wherever you buy books and graphic novels, and you can buy it from the Hungry Tiger Press website here:

I think Edward’s script of Euripides's Iphigenia in Aulis is excellent, and not just because he used my Age of Bronze spellings of names and evoked in some of the script's textual points echoes of the cultural background I present in Age of Bronze. Edward just writes lively as a matter of course. Euripides ain’t no slouch, either, I can tell you!

Posted by ericshanower at 4:23 PM 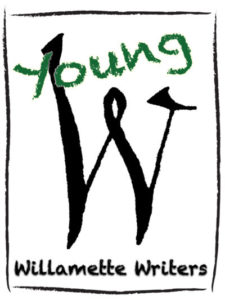 On Saturday, March 5, at 10 AM, I'll be speaking to the Young Willamette Writers about writing comics. I'll be offering advice from my years of experience as a professional cartoonist. I've written graphic novel and comic book scripts that I drew myself, for other cartoonists to draw, and I've drawn plenty of scripts by others.

The presentation will be virtual on Zoom, so sign up early for the link. Attendance isn't restricted to members of Willamette Writers, but non-member attendees are asked to donate $5. The target age for Young Willamette Writers is 13-18 years old. So if you know a young adult who's interested in scripting for comic books or graphic novels, mention this presentation.

Here's the link to the announcement.

Posted by ericshanower at 12:49 AM