Today I made a presentation at the Comics Event of the Gay-Straight Alliance/Equality Club at James Madison High School in San Diego, CA. I spoke to a group of students gathered from several high schools in the area about my cartooning career. I showed examples of many of my projects with an emphasis on Age of Bronze. The second half of my presentation was about creating comics, and I asked the students to help me create a two-page comics story as part of my presentation.

I gave them a general outline of what the story would be about:

Character 1 is being chased by Character 2 in a specific environment. Character 1 ducks into hiding as Character 2 runs past. In the final panel Character 1 turns around to see something surprising. (This is actually a variation on a project that Joe Kubert used to assign at the Kubert School.)

I used a document camera so everyone could watch as I wrote and drew following the suggestions the students came up with. It seemed like they were all having a great time. I know that I was having fun.

First we designed the characters. 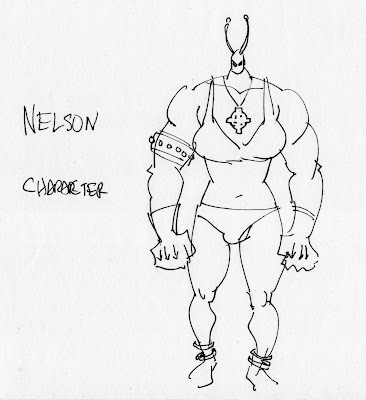 Character 1: Nelson, an immense musclebound figure with both female and male attributes, jewelry, gloves, and a tiny alien head. 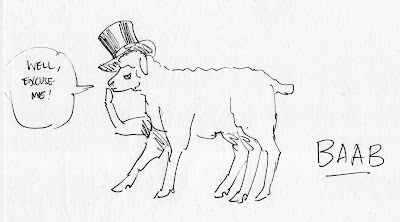 Character 2: Baab, a sheep with a top hat and six legs.

After we decided the story would take place in a supermarket, we wrote the script.

PANEL 1 (Nelson flexes. Baab sees Nelson from a distance. They’re in a supermarket.)

Baab: How dare they!

Nelson: Never—I’m getting out of here!

Nelson (thought): The CIA has found me.

PANEL 2 (Baab runs by the restroom.)

Baab: I love you, my muscular plankton!

PANEL 3 (Inside the restroom, Nelson turns to see a huge herd of sheep dressed as CIA agents.)

Finally I drew these two comics pages, following the script, with some further input from the students. I was racing against the clock to get these pages drawn, since the group was scheduled to Skype with Georgia Congressman John Lewis about his graphic novel series March, published by Top Shelf Productions. So my artwork is a bit rushed. 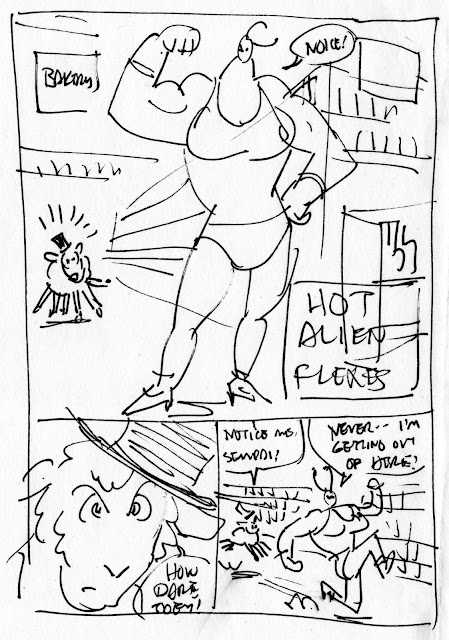 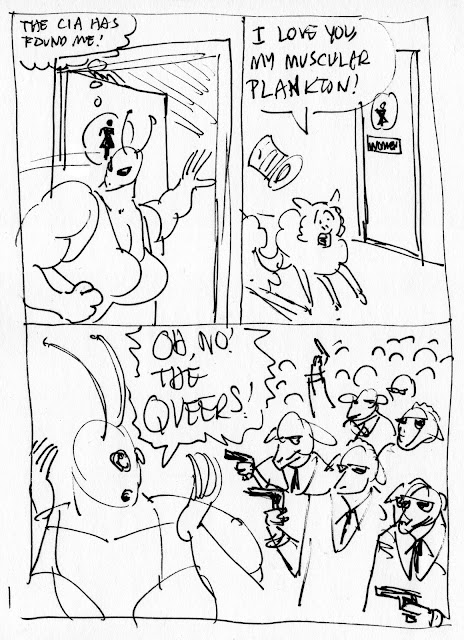 Make of that what you will. I disavow responsibility.

In the interests of privacy I haven’t posted the students’ names, but they were true collaborators on this comics story and I acknowledge their creative contributions. I'd like to give a big thank you to Mick Rabin for inviting me to make this presentation. It was a blast!

Email ThisBlogThis!Share to TwitterShare to FacebookShare to Pinterest
Labels: appearance

A few weeks ago I sketched at a dress rehearsal for a new opera, Great Scott, by Jake Heggie and Terrence McNally. My sketches are posted on the San Diego Opera Facebook page: click here.

Great Scott is about a famous mezzo at a crossroads in her career. She's had success doing what she loves, but she's not exactly sure about where she's going. I loved it.

As San Diego Opera's official unofficial cartoonist, I've been sketching at dress rehearsals of their productions for six years now. Some of the operas they've presented I've liked, others I haven't. Great Scott I loved. It's right up my alley. A woman plumbs the depths of her soul in one scene and jumps as a human sacrifice into the crater of an erupting volcano in the next. Substance and sensationalism combined will usually grab me every time.

I'm also proud to say I've previously worked with several people in the cast. Not the stars--Kate Aldrich, Nathan Gunn, and Frederica von Stade. But chorus member Joseph Grienenberger was Musical Director of my 2014 production of The Tik-Tok Man of Oz. Chorus member Laura Bueno played Betsy Bobbin in The Tik-Tok Man of Oz. And dancer Shawn Burgess performed the Cavalier in Del Mar Ballet's 2015 production of The Nutcracker in which I played Drosselmeyer and Mother Ginger. 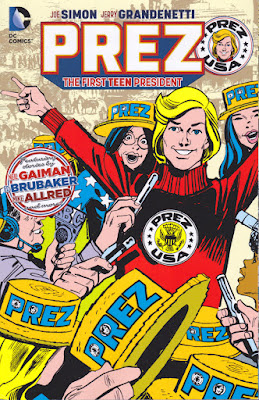 Do you find the current USA presidential campaign to be a little bizarre? Well, it's nothing compared to the campaign and presidency of Prez Rickard, the first teen president of the USA.

The new graphic novel, Prez, recently published by DC Comics, collects the whole of that strange, excessive, and well-meaning-but-unfocused saga that began in 1973. And when I write "whole," that's what I mean. All four issues of the original series are contained here, but so is the fifth issue, which was only released for legal purposes in the very limited Cancelled Comics Cavalcade. The Supergirl story that prominently features Prez is here, along with the issue of Sandman by Neil Gaiman, Mike Allred, et al, which repositioned Prez in the DC/Vertigo universe.

Also included is the reason I'm mentioning this book: Prez: Smells Like Teen President, the 1995 one-shot written by Ed Brubaker with art by yours truly. This story pays homage to all the Prez material that preceded it--including the Supergirl story. I had to fit the Supergirl reference into it surreptitiously. There were two obstacles to this. First, at the time, Supergirl had been written out of comics continuity. And, second, the DC superhero universe was separate from the universe of DC's Vertigo imprint--no crossover allowed.

I'm not going to reveal how I successfully worked in a reference to the Supergirl "Prez" story. You'll have to find it yourself. It didn't violate any of DC's rules, but still I never mentioned it to my Vertigo editors Lou Stathis and Axel Alonso. I think I mentioned it to writer Ed Brubaker, but I wouldn't be surprised if he doesn't remember it now. (Although Ed's got a great memory.) Once spotted, however, I think it's pretty evident.

The publication of this story had unfortunate repercussions. Ed Brubaker had punctuated his script with a few four-letter words. But editor Lou Stathis told him to add more. A lot more. The f-word doesn't appear on every single page, but the pages where it appears multiple times probably make up for that. Reviewers gave Ed a bit of heat for this. I even had a phone call from Harlan Ellison who told me in no uncertain terms he thought it was too much. (As if Harlan Ellison would ever say anything in uncertain terms.)

When I drew this story I followed Ed's script, which included a few scenes where the main character is nude. I made no attempt to hide any genitalia. No one at DC/Vertigo had any problem with this until very late in the process when Axel broke the news. Word had come down from on high: no genitalia. The penciled art was complete, so I had to figure out how to deal with this editorial direction.

My partner David suggested that I just paste the DC logo over every instance of genitalia. Funny--but I didn't think that would fly. I didn't want to redraw figures in contorted positions to hide body parts, and I didn't want to just slap down shadows in places where nothing would be casting a shadow. My solution was to "blur out" all the genitalia. When I inked the art, I just cross-hatched over what I'd penciled. I figured it was like what they do on tv when they blur a person's face to protect their identity. Aesthetically I found that the most comfortable solution.

After the book was published I got a stern phone call from editor Lou Stathis. He reprimanded me for leaving in genitalia. I assured him that I hadn't. While on the phone he and I looked at the published comic. What I had intended as scribbles Lou insisted was clear genitalia. To this day I insist they're scribbles and anything else they are is in the mind of the viewer. However, I was sorry to have this disagreement with Lou.

He had been dressed down by Karen Berger, then editor-in-chief of DC's Vertigo imprint. Mattell, the toy company, had complained to DC Comics. Mattell had taken the back cover for a toy ad and was unhappy that the interior, in Mattell's view, had pictures of genitalia. I was pissed off that anyone thought my careful, considered artwork could somehow be a reflection on their tasteless ad for a bunch of ugly monster dolls.

Last in this new Prez collection is an excerpt from Frank Miller's DK2 and a Multiversity Guidebook entry that includes Prez.

I was surprised to learn of this new Prez graphic novel collection. My comp copies arriving in the mail were the first I was aware of it, although it seems to have been published in 2015. Back in 1999 or 2000, hoping to get a little more mileage out of Prez: Smells Like Teen President, I submitted a proposal for this very project to editor Shelly Bond at Vertigo. She turned it down then. I don't know whether someone came across my proposal more recently or whether someone remembered it or whether someone thought this up independently. But here it is at last in all its curious, excessive, bizarre glory--Prez, the First Teen President--just in time for your election year enjoyment. Ask for it at your favorite comics retailer.

If only Prez Rickard were running now.