Iphigenia in Aulis, the Einhorn Translation

New York playwright, stage director, and author Edward Einhorn is a friend of mine and a collaborator. I illustrated two of his children's books (Paradox in Oz and The Living House of Oz). We also worked together on a project closely related to Age of Bronze.

Several years ago Edward and I were discussing the Greek tragedy by Euripides Iphigenia in Aulis. I'd used the play in Age of Bronze as a major source for the "Sacrifice of Iphigenia" episode, as seen in volume 2, Sacrifice. Edward had previously translated Aristophanes's Greek comedy Lysistrata and was considering translating more Greek drama. Our discussion got him interested in Iphigenia in Aulis.


In 2013 the theater company of which Edward is artistic director, Untitled Theater Company #61, produced Edward's translation of Iphigenia in Aulis. Edward directed it, too, and wanted me to be part of the show. In a nod to the tradition of classical Greek theatre, the actors wore masks--masks based upon my character designs for Age of Bronze. Panels from Age of Bronze were used in the scenery for the show. And Edward asked me to design the advertising poster for the show, an image of the Mask of Agamemnon eclipsing Iphigenia.

Recently Edward Einhorn's English translation of Euripides's Iphigenia in Aulis was made available for digital download. You can access that by clicking here. You may read the script for free. Payments are
due for performance.

I saw the show during its New York run and enjoyed it very much. Unlike many contemporary productions of Greek drama, the chorus actually sang rather than simply reciting their lines. The rock score by Aldo Perez is dramatic and affecting. This play has as much power today as when it first wowed audiences in 405 BCE.

As I promised a few posts ago, here is a page from the upcoming Age of Bronze #34. It's at the pencil stage, not yet lettered and inked. This scene concerns a group of Trojan women on Mount Ida, south of Troy.

Click on the image to see it larger in a new window.

Those who know the story of the Trojan War might realize this page leads up to the episode of Helen meeting Achilles on the peak of Mount Ida. The earliest reference we have to this episode is in Proclus's summary of the Epic Cycle--near the end of the Kypria to be exact--which is probably from the middle of the first millenium BCE, maybe the sixth century, although no one knows for sure. Later authors treated it in more detail, but it's still one of the less well known parts of the Trojan War story.

It's part of Age of Bronze, of course, and this issue will present my version of Helen and Achilles meeting.

The Colorful World of Oz 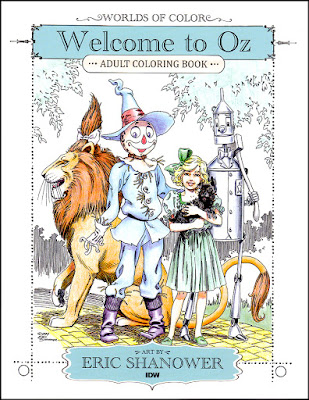 In addition to Age of Bronze news, I'll occasionally post about other projects of mine. Here's a recent non-Age of Bronze one.

Over the years I've written and illustrated many comics, books, and other publications concerning L. Frank Baum's Land of Oz. My latest is an Oz coloring book titled Welcome to Oz, published by IDW last month. It features thirty black-and-white Oz images just ready for you to color. Some of the images have appeared elsewhere and some are new for this book. One bonus feature is a four-page fold-out of a galaxy of Oz characters.

You can find Welcome to Oz at your favorite bookseller, both actual and online. You can also order it from Hungry Tiger Press by clicking here, where each copy ordered will be signed by me.

Oz is for the young and young-at-heart, so I find the subtitle "Adult Coloring Book" amusing. Yes, the current coloring book craze is being propelled primarily by adults who find coloring with pencils, markers, or crayons a perfect way to relieve stress. But labeling Oz as "adult" seems odd. Nevertheless, the artwork in the book is suitable for non-adults and brings you the Oz characters--from the Scarecrow to Ozma to the Patchwork Girl and even to Rinkitink--as generations of Oz fans of all ages have known and loved them.

Email ThisBlogThis!Share to TwitterShare to FacebookShare to Pinterest
Labels: Oz

Paris and Oenone in Vier Heuvels

Recently Age of Bronze played a small role in the creation of a unique musical project, Four Hills—Love in Wartime (‘Vier Heuvels–Liefde in tijden van oorlog’), presented by the Belgian orchestra Il Fondamento, together with the Conservatiores of Amsterdam, Ghent, and Brussels. Four Hills was a sort of opera, consisting of four sung episodes on stage, each involving a couple on a hill during wartime. These four settings were ancient Troy; Les Éparges in Verdun, 1916; La Loma de la Malagueñas, 1936; and the Temple Mount, 2015. The production featured the work of four young composers on a libretto by Jacob van Cauwenberghe. Gillis Sacré composed "Ilion," the Paris and Oenone scene. The other composers were Tihmen Van Tol, Nikos Ioakeim, and Nina Fukuoka.

The artistic director of Il Fondamento, Dr. Bruno Forment, approached me to license an image of Paris and Oenone from Age of Bronze. He felt it captured the sense of Four Hills and wanted to use it in advertising and on the program cover. I was happy to make the deal.

I didn't travel to Belgium to see the performance of Four Hills on February 21. But Dr. Forment informs me that it was an exciting success and that the image from Age of Bronze had a small influence on the production—it inspired the stage director to use headbands to identify characters.

Below is a video from the rehearsal period of Four Hills—Love in Wartime, featuring the Paris and Oenone image from Age of Bronze with color by John Dallaire.

I really liked having a digital edition of Age of Bronze published. It was colored by John Dallaire under my approval. Every page was annotated by Tom Beasley, Visiting Assistant Professor of Classics at Bucknell University. And each issue was just 99 cents.

Unfortunately only the first four issues of Age of Bronze "Seen" were published. The digital edition didn't receive the volume of readership that the publisher had hoped for. Throwaway Horse's other digital comics don't seem to have warranted continuation, either, since Throwaway Horse is shutting down as a company.

Colorist John Dallaire finished the color on several issues beyond what Throwaway Horse published and is continuing to color Age of Bronze. In due time I'll find a new publisher for a digital edition of Age of Bronze and it will continue to be available in color. And I plan to eventually publish print editions of the graphic novels in color, too, through print publisher Image Comics.

If you want to sample Age of Bronze "Seen" on your iPad while the app is still available for a short while, click here to access the iTunes store. 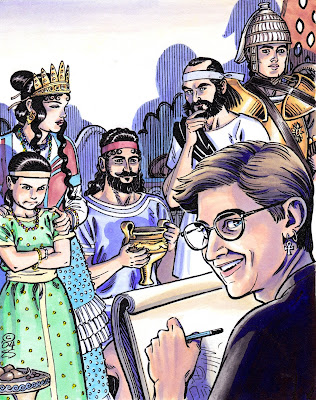 Welcome to the new site for Age of Bronze news!

Here's a brand new forum to keep up with everything new and exciting that's going on with Age of Bronze and with me. First of all, I want everyone to know that I'm well into the artwork for issue #34 of Age of Bronze. This issue presents the meeting between Achilles and Helen on Mt. Ida.

For years I posted news on the Age of Bronze website in a sidebar, keeping readers up to date on new Age of Bronze comic books and graphic novels, as well as all my latest projects and doings. But recently the host of the site, Godaddy, made adding new entries so burdensome that my news became sporadic.

But now all that's changed with this brand new forum for Age of Bronze updates and news. I'll post some in-progress artwork from issue #34 soon. That's one of the advantages of this new forum--it's much more flexible and easier to show stuff!

But don't worry. The main Age of Bronze website is still there, and so is the web-store where you can find and order Age of Bronze graphic novels, comic books, and t-shirts--along with a generous selection of other projects I've worked on, books, comics, and posters.