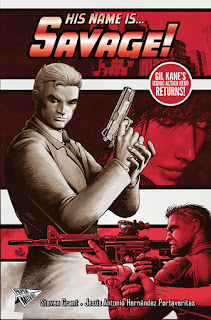 Although I was told that the project found a publisher, no one told me when it came out. And I've never actually seen it. I did the cover I was contracted for, and was pretty proud of it (below right). But now that I'm trying to catch up on posts detailing recent (and not-so-recent) projects, I thought I ought to mention this Savage project. 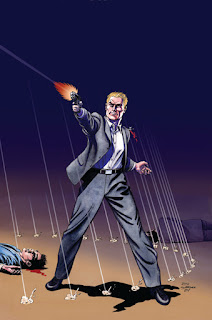 I found it for sale online, but it looks as if it was published only in the graphic novel format, not as a comics book series. You can see the published cover to the left. Unfortunately, the book doesn't include my cover. So I've included it here, on the right.

This recent iteration of Kane's His Name is . . . Savage! boasts a script by Steven Grant and art by Jesus Antonio Hernandez Portaveritas. I read the whole project as background for creating my cover, and I really liked it. I've long admired Steven Grant's comics stories. This one thrills as much as his work has ever done. So I'm disappointed the book doesn't even print my cover in a gallery of covers in the back of the book. I mean, they paid me for it AND the book has a blank page at the end.