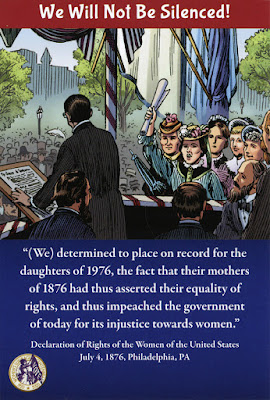 On July 4, 1876, one hundred years after the United States of America declared its independence from Great Britain, more than half the population could still not vote in a federal election. White male landowners had the vote from the beginning of the country. In 1870 the Constitution granted black men the right to vote. But all women were still denied voting rights.

At the great centennial celebration of the USA in Philadelphia, the National Woman Suffrage Association was denied the right to speak. So Susan B. Anthony, Matilda Joslyn Gage, Sara Andrews Spencer, Lillie Devereux Blake, and Phoebe W. Couzins stormed the podium during the proceedings to present the Declaration of the Rights of Women of the United States. The women were shooed from the stage. Another fifty-five years passed before women in the USA could vote in federal elections.

Syracuse Cultural Workers issued a postcard commemorating the July 1876 issuance of the women's rights declaration. I drew the artwork for it and Laura Martin colored it. I originally drew it for a short comics biography of Matilda Joslyn Gage, perhaps the most fascinating figure in the women's rights movement of her time. I highly recommend her book Woman, Church, and State first published in the 1890s. I suspect it will never go out of style.

If you're interested in ordering the postcard with my drawing of Matilda and her compatriots, it's available here: https://www.syracuseculturalworkers.com/products/postcard-protesting-inequality-at-us-centennial-1876