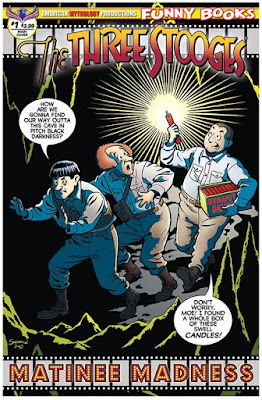 On sale next Wednesday, September 5, is issue #1 of The Three Stooges: Matinee Madness. I drew the cover and the two main stories inside this comic book, published by American Mythology. Mike Wolfer scripted the stories and wrote the joke for the cover

When I mention to people that I'm drawing the Stooges, I'm often asked whether I'm drawing Shemp. No, this line-up of the Stooges is Moe Howard, Larry Fine, and Curly Howard. The stories are set in the mid-1930s. The coloring is in gray tones to simulate the look of a black-and-white motion picture. The Three Stooges: Matinee Madness strives to bring you the experience of a vintage Stooges movie short.

The first of the stories I drew is called "Shaky Bakers." The Stooges are called to a mansion as exterminators during a dinner party. Somehow they end up in the kitchen as dessert chefs. Slapstick and spooky shenanigans ensue.

The second story is "Loons on the Lagoon." The Stooges are running swamp tours, but when a gang of hard cases shows up, they're shanghaied into the middle of a lab experiment gone awry.

Posted by ericshanower at 5:30 PM