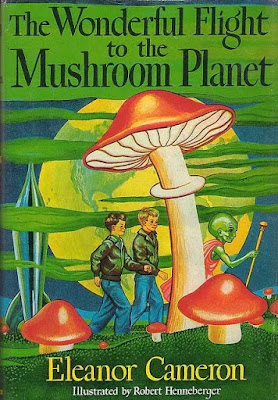 At eight years old I read for the first time Eleanor Cameron's 1954 science fiction children's book The Wonderful Flight to the Mushroom Planet. The book drew me in as only the best books can. I wanted to be one of the characters and go on that wonderful space flight. And while I read the book, that's who I was and what I was doing.

Afterward, I read the sequels, though none of them manages to capture the power or produce the intense longing of the first book. In fact, though I tried as a child, I couldn't get all the way through the final book in the series, Time and Mr. Bass. That had to wait until I was an adult.

Through a mutual friend, I met Eleanor Cameron for the first time in 1985 at an Oz convention. Though she wasn't particularly an Oz fan, our mutual friend was, and she lived in the next town from the convention facility.

I went to her house only once, after both she and her son
David, the model for the hero of the Mushroom Planet series, died. Our mutual friend as David's executor took me and my partner there to a meeting with Eleanor's executor and to help clean out some of her final belongings still remaining in the house.

Eleanor's papers went to the Kerlan Collection, the University of Minnesota's children's literature branch. Those papers included a sixth Mushroom Planet manuscript. The mutual friend arranged for me to read a copy of this manuscript with the intention of determining whether I could shape it for publication. And if so, I would get the job of illustrating it, too.

I was excited, hopeful, and a little intimidated.

I plowed through the entire published series once again, then read the unpublished manuscript. Parts of it are delightful. But my overall reaction was disappointment. Even granting a twenty-five year gap since the previous Mushroom Planet book, I found some of Eleanor's choices confusing, even troubling. For instance, aspects of the manuscript indicate that the action takes place shortly following the final book in the series, which would be during the 1960s. But the manuscript also contains contemporary mid-1990s references, such as a mention of CNN. Eleanor left a list of notes addressing problems with the manuscript. She clearly recognized some of the manuscript's deficiencies, including the confused time period, but many of her notes don't even hint at possible solutions or suggestions for revisions.

In my opinion, the story needed re-thinking, re-shaping, a tremendous amount of foundational work before it might be brought into shape as a worthy addition to Cameron's Mushroom Planet series. I didn't feel competent to perform that work. In my opinion, someone far more in tune with Eleanor Cameron's creative thinking should be the one to do it, if, indeed, such work could ever be done by someone not Eleanor herself. So that was that.

A few years ago, I received an e-mail out of the blue from Paul V. Allen, then working on a biography of Eleanor Cameron. He'd run across a comment I'd written online. Mari Ness on her tor.com blog posted her delightful analyses of the Mushroom Planet books. There I'd mentioned some of my interactions with Eleanor and her work. For Paul I expanded on that info and put him in contact with the mutual friend who'd facilitated my meeting Eleanor in the first place.

Then I pretty much forgot about Paul's Cameron biography. 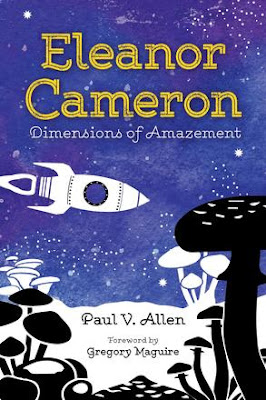 A few years later I got an e-mail from Paul announcing the book: Eleanor Cameron: Dimensions of Amazement. It's a well-put-together, readable biography. Eleanor Cameron gave children's literature far more than just the Mushroom Planet books, although Wonderful Flight still holds a special place, not just in my reading history, but in the memories of many readers.

The biography delves into Cameron's philosophy as a writer. She held definite ideas about writing for children. She practiced those ideas in her own projects and spoke out on them, too, famously criticizing Roald Dahl's Charlie and the Chocolate Factory, a book that gave my childhood a similar sort of immersive experience as had Wonderful Flight.

Paul V. Allen mentions me in the course of the biography. I find that slightly embarrassing. I feel like such a minuscule part of Cameron's life, the tiniest of endnotes at most. Still, I'm happy to be included as a part of the life of Eleanor Cameron. What I've enjoyed the most about the book, though, is learning more background about the Mushroom Planet series.

If you've ever enjoyed any of Eleanor Cameron's books--any of the Mushroom Planet series, the Julia Redfern series, or books such as A Spell is Cast and The Terrible Churnadryne--you would probably enjoy Eleanor Cameron: Dimensions of Amazement by Paul V. Allen. You can order it directly from the publisher, University of Mississippi Press, at this link:

Posted by ericshanower at 2:45 AM